Julia Jacklin is a singer and a songwriter from Blue Mountains, Australia.

And though she definitely does indie-rock songs on her debut album, “Don’t let the kids win”, she cites as her main influences, a very eclectic bunch of musicians like Doris Day, Bjork, The Andrew Sisters and Billy Bragg.

“Don’t let the kids win”, she thought, would be a “heartbreak record”, but instead is a very well written piece on life and its hardships, especially if you are currently in your 20s, lost, trying to make it out alive, and in desperate need of (some) answers. Know, you are not alone and are experimenting a lot of what anyone has to deal with in a lifetime. 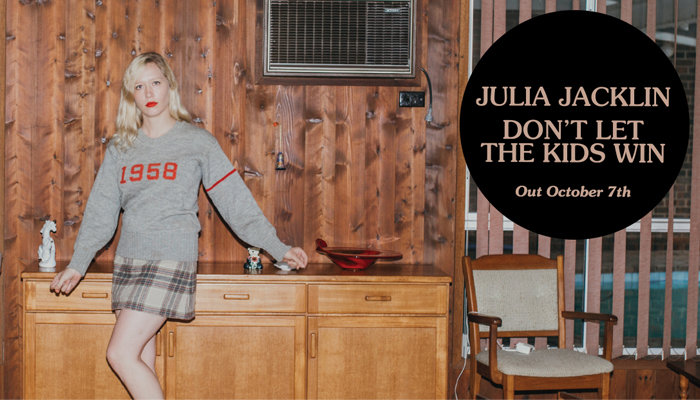 So here is a chronological breakdown of each song on the album:

This song sets the tone for the whole album, very retro, nostalgic, blue and sometimes rock.

It has a very old school vibe and a 60s tempo. It very much sounds like a lullaby, though it isn’t. This ballad evokes childhood, love and alcoholism.

And though, I am not one for comparison, from the first second, you notice a very distinctive resemblance to Angel Olsen’s style, voice, diction, and sometimes monotony in the delivery of the song. I couldn’t help but to immediately think of Olsen’s “Unfucktheworld”.

Love is its main theme. This is still a very slow song but by the few last seconds of it, there is a slow increase in pace, which helps get into “Coming of Age”.

This song really grew on me. The music is very obsessive, and so is her voice.

This third song on the album marks a turn in rhythm and tone. It is a very rock, loud, and rapid song. This song is saturated with heavy electric guitars and battery.We can also hear harmonica at some point.

Julia Jacklin’s delivery here is tinted with passion and what can be hear as anger. She sings about “coming of age” as the title indicates. And as she starts the song we learn it is about “finding myself a girl…who makes my straight toes curl”. So, these lyrics leave no room for interpretation, about the kind of “coming of age” she talks about, whether or not it is a personal confession.

It is a very simple but pleasant song, but I can’t quite figured out why.

In Motherland, the electric guitar and the battery return, but there are some jingles throughout the song as well.

It is a melancholic, yet somehow upbeat ballad. The writing is most remarkable here by the themes it touches on like childhood, innocence and life.To me, this is absolutely one of the most beautiful composition of the album.

This song has been a very pleasant surprise for me when I heard it. The lyrics are as witty as there are sad. But interestingly enough, it has an upbeat vibe.

It has similarities with “Motherland” that preceded it.

Here, Julia Jacklin imagines a world where Zach Braff could have been her father, and Catherine Deneuve her mother, though we can hear Catherine Denevue when she sings.

Sadly enough for her, one is too young, and the other too old to be her parents. And she has no luck in this life for she finds the ideal guy at a bar, but this time, she is too old to be with him.

And even though she couldn’t get those three people, she concludes that she will have a good life with all she desires:

So don’t you waste my time

Don’t you waste my time

On small talk and cheap wine”

Let’s hope so. But if not, we will enjoy her music and humour.

This is unequivocally a break-up song, and as can be expected it is very dramatic and sad.

But it isn’t like any break-up song, and that is because of its sarcastic writing and tone.

In its dramatic side, it shows a lot of humour, especially in the metaphors used.

Indeed, Julia Jacklin assimilates herself to a “listless”, “broken’ and abandoned dog.

But at least she is a dog who has her fridge full of food, since the “babe” she sings about had the decency to do some grocery shopping, just before dumping her. What a thoughtful guy, truly!

“Sweet Step” is a slow song about dancing, or at least trying, and loving.

It possesses a very simple yet efficient melody. But that said I don’t really know what to feel about it. It hasn’t left me with anything. I find it quite random and a little outside of the rest of the album. I didn’t connect to it.

It is yet another ballad-like song. And as strange as it is, it made me think of a western, especially in its composition, even though it is about loss and lost love at an airport.

But it really does have a western-movie-like vibe, as well as some country notes.

And this song, along with “Motherland”, really illustrates Julia Jacklin’s talent for songwriting and storytelling. She has a smooth and efficient writing that eases you, with each song, into a new atmosphere, a different place, a new emotion.

This is another pleasant ballad, with rock accents that distinguishes it from the rest of the album, along with its subject.

Indeed, it is the only mention of the singer’s native Australia in the album. The title of the song references Hay, which is a town in New South Wales, Australia. It is one of the flattest places in the world, and is known for its plains and biodiversity. And the singer specifically mentions Adelaide and Hay Plains.

But Julia Jacklin also hints at an Australian transport solution project when she sings about being “besides that truck driver on the Western Distributor”.

The album closes like it opened, with a deeply personal ballad.

“Don’t let the kids win” gave its title to the album, and as such occupies a very important place in the record.

It closes the album like the back cover of a book. It sums up its themes (love, family, childhood, adulthood, loss, life, changes), but also life and its tribulations. This song is joyful, nostalgic and hopeful at the same time, like the rest of the album.

Listening to this album, I really felt a connexion to Julia Jacklin, especially theme-wise. She talks about the past, her childhood, growing up, and still figuring out how to be  herself in an adult world where no answers are given to you on a silver plate.

So she leaves us with the knowledge that not knowing where to go, what to do, and all these things you have to figure out in your 20s and are puzzled by, are normal because there is no clear, linear and easy path that everyone can take. You have to figure it (adulthood, life, …) out and create your own path.

Julia Jacklin said that: “in hindsight I see it’s about hitting 24 and thinking, ‘What the fuck am I doing?’ I was feeling very nostalgic for my youth. When I was growing up I was so ambitious: I’m going to be this amazing social worker, save the world, a great musician, fit, an amazing writer. Then you get to mid-20s and you realise you have to focus on one thing. Even if it doesn’t pay-off, or you feel embarrassed at family occasions because you’re the poor musician still, that’s the decision I made.”

And I think that is really apparent when listening to the album “Don’t let the kids win”. And that level of resonance and her ability to communicate it, not only to her generation, but to the older ones as well, will make her album successful.

You can listen to the album, just below:

If you have enjoyed the album, know that Julia Jacklin is touring the world right now. You can check her upcoming gigs on her website. And for those in Paris (France), she will perform next Wednesday at Le Pop-Up du Label and the tickets are super affordable.

*: The Asterisks are for my favourite songs on the album